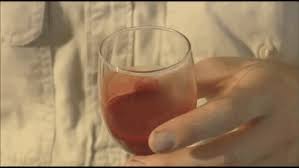 I’ve had a few people ask me about this test today after I posted about it in my list of blood tests that I’ve had in the last year, so I figured I’d share some more information about it.

For starters,  the test is officially known as the Dilute Russell’s Viper Venom Time (DRVVT). While it’s not a rare test per say, it’s not generally  ordered as a part of routine blood work . Typically, a doctor will order this if they are looking for specific markers relating to certain blood clotting disorders, such as those in Antiphospholipid Syndrome (APS). Still, when I called for my test results the nurse who read my result had never even heard of this test and had no idea what the result meant – other than it was flagged as being abnormal (more about that later). Nevertheless, the test itself is really interesting (and slightly confusing as well).

Although my test was done in the laboratory, this video will give you a good demonstration of how and why viper venom is used to test the coagulation times of human blood.

Also kind of scary to think about what happens to the body when an individual is bitten by such a venomous snake. Luckily, though, that wasn’t the case here.

According to the Practical Haemostasis Website, the “Russell’s viper venom [RVV] isolated from the snake Daboia russelii [orrussellii – contains a potent activator of factor X which in the presence of phospholipid [PL], prothrombin and calcium ions clots fibrinogen to fibrin. In individuals with a lupus anticoagulant [LA] the antibody binds to the phospholipid inhibiting the action of the RVV and prolonging the clotting time.
As the RVV directly activates factor X, the test is unaffected by deficiencies of factors XII, XI, IX or VIII. The DRVVT is frequently combined with a platelet neutralisation procedure to demonstrate the phospholipid specificity of the antibody” (para. 1).

One thing to note here is that the Lupus anticoagulant does NOT test for lupus  – although the test may be positive for some individuals if they have both Lupus AND APS. It’s merely an immunoglobulin that is associated with an increased clotting time.

From The American Association for Clinical Chemistry

Lupus anticoagulant testing is a series of tests used to detect lupus anticoagulant (LA) in the blood. LA is an autoantibodyassociated with excess blood clot formation. LA testing may be used to help determine the cause of:

LA testing may also be used:

LA cannot be measured directly and there is no single test or standardized procedure to detect the presence of LA in the blood. A series of tests is used to confirm or rule out the autoantibody:

Pooled normal plasma is mixed with diluted PL at 37°C. Diluted RVV and then calcium chloride are added and the clotting time is measured. The test is then repeated using patient plasma and the ratio of test:normal plasma is calculated. 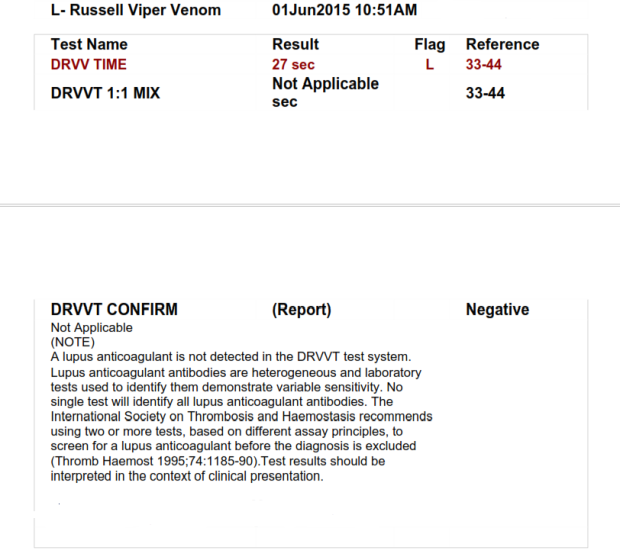 Although my test results were out of the normal limits, it is not considered a positive test because my result would need to be higher than normal range (slower clotting time) and mine was below the average (faster than the normal clotting time).  Make sense? No idea if a low score has any clinical significance – haven’t found anything that even mentions it.

Below are some explanations about the meaning of the results and how to determine a positive test.

From The American Association for Clinical Chemistry

The results of the series of LA tests either lead toward or away from the likelihood of having LA. The laboratory report may be somewhat complicated, but it usually provides an interpretation of the results and states whether LA is present or absent. LA testing results, like those of other tests for clotting disorders, are difficult to interpret and are best evaluated by physicians with experience with excessive clotting disorders.

Although the initial tests performed for LA may vary, they usually begin with a PTT that is prolonged. A PTT that is normal (not prolonged) may mean that there is no LA present. However, the test may not be sensitive enough to detect LA and the LA-sensitive PTT (PTT-LA) may need to be done.

Lupus anticoagulant testing is often done in conjunction with tests for cardiolipin antibody and anti-beta2-glycoprotein I antibodies to help diagnose antiphospholipid syndrome. The results are interpreted together, along with clinical criteria, in order to make a diagnosis.

Results of other tests that may be performed to help rule out other causes of a prolonged PTT include:

Other tests that may be done to help confirm the diagnosis of a lupus anticoagulant include:

If the DRVVT is not prolonged then the correction test (sometimes referred to as the neutralisation test) is not indicated.

1. The percentage correction is calculated using the formula below where ‘+ PL’ is the DRVVT with additional phospholipid i.e. the neutralisation step.

2. The percentage correction of the ratio is calculated using the formula below where again ‘+ PL’ is the DRVVT with additional phospholipid. The final result is multiplied by 100 to convert it into a percentage:

This latter calculation is that currently recommended by the British Committee for Standardisation in Haematology [BCSH.]

In the following example:

In individuals in whom a LA is identified, the test should be repeated in 12 weeks. It should also be remembered that not all tests including the DRVVT will identify all LAs and therefore, if the index of suspicion that a specific patient has a LA then other tests should be undertaken e.g. Silica Clotting Time [SCT]. Finally – the causes of a LA should be screened for e.g. ANA, drugs, viruses etc.